You are here: Home / Discussion Starters / Twelve-year-old starts an association to advance Bedouin women, A

Chesem leads the Lakia Women’s Association formed to empower the women of her Bedouin village in Israel.  At twelve, she and her friends wondered what the men talked about when they met in a tent on a hill.  As shepherds, they led the sheep under their care close to the tent so they could hear what the men were talking about.  They heard that the men had organized themselves.  Chesem and her friends decided to do the same.  In time, they had formed their own organization, the LWA.  Their purpose was and still is empowerment of the village’s women.  Their first project was teaching the women about birth control.  The men resisted.  They met that resistance by emphasizing it was best for the children. 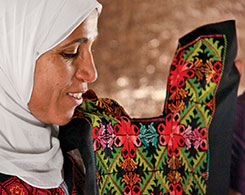 [Where is the Spirit at work in this story?]