You are here: Home / Sermons/Writings / Being the Church Today: A Talk By Pastor Steve Willis

[This article is adapted and excerpted from Imagining the Small Church: Celebrating a Simpler Path by Steve Willis, copyright © 2013 by the Alban Institute. All rights reserved.] 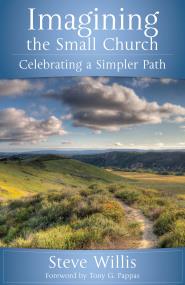 The numerical height of mainline Protestantism in the United States occurred in the year 1965.1 That was the year that the largest percentages of American people affiliated with and attended church. More Americans were going to church than at any other time in U.S. history. Where I live in the South, this “high-point” is usually considered to have occurred several years later. The high-point was the late 1960’s, not 1776, when our nation was being born through a bloody rebellion against England, nor was it 1861, when our nation began the brutal internal struggle of the Civil War and saw the beginning of the end of slavery. Nineteen sixty-five was the year “The Sound of Music” premiered in New York City, the year that 3,500 U.S. Marines arrived in South Vietnam, the year that President Lyndon B. Johnson signed the Social Security Act, establishing Medicare and Medicaid. Nineteen sixty-five was the year that CBS first aired “A Charlie Brown Christmas.” In other words, it wasn’t that long ago. In the living memory of many church people are the days when we were most popular in our nation’s history.

We tend to get nostalgic when thinking back on the church’s role in American society. We have let our frustration with our fairly new status as the peripheral mainline of Protestantism today create a festering illusion in our minds. The change in our social location from being at the center of culture to moving toward the periphery has clouded our vision. We dream that once upon a time all our churches were big, bustling centers of activity, filled with children, distinguished by selfless service to the community, and immersed in happy, loving relationships between people.

Yet consider the reality of what churches actually looked like in this era. Less than a decade after the apex of American church growth, the Presbyterian Church in the United States (the former denomination of Presbyterians in the southern states) published the work of a task force reporting on the small church. By 1974 when this report was published, the southern Presbyterian Church was near its numerical height. The church was booming. So our nostalgic memories should be chastened by the reminder that in 1974, 73 percent of these churches had a membership of fewer than 250 members. And 44 percent of these churches had a membership of under 100 members!2 So the truth is that even during the “glory days” the majority of our churches were small.

As mainline Protestants, we are still working through our fixation with numerical decline. We used to be the popular kid in class, but now—not so much. One response to this changing circumstance has been the creation of an unrealistic mental picture: once we were a great and glorious church, but now we are doomed to the dustbin of history. This fanciful delusion keeps us from seeing the ministry right in front of us. This Camelot-like dream diverts us from both the joys and the challenges of being the church today. We have romanticized our triumphs. We have confused our former popularity and status in the culture with being the church of Jesus Christ. We pine for the glories of our misremembered past.

So today, as we evaluate the church through relentless, overbearing market analysis, we mistakenly use dominant culture tools to understand our present situation. We have less power, less money, and fewer numbers. So we think we must be dying, because life can only be measured by numbers and money. Right? Ironically, the proof of our decline is not lessening power, money, and influence but rather our commercialized, dominant-culture idolization of the market. We see our situation through the same spectacles that the dominant, secular American culture views the world. The problem is not that we are getting smaller and more peripheral. The problem is a lethargic faith imagination and a graceless covenant love.

Small churches, especially small rural and neighborhood urban churches, have an advantage in this changing context. They are less likely to be stuck in the unrealistic, pining daydream about past power and prestige. These churches did not feast on the popularity boom of the fifties and sixties. Here, one will not see reminders of the glory days; no sanctuary that will seat five hundred; no pictures of hallowed ministers from yesteryear; no monuments to influence and position.

Small, peripheral-church folk may bemoan the waning influence of Christianity on American culture. But this is a different kind of lament. And, after the last decade’s shameless greed and endless military campaigns, they have good reason to bemoan the loss of Christian influence. The small-church lament is not about being left behind. It was always behind, always out of step, and always at the margin. The small-church lament is that things are not as they should be. And, that lament has a long, important tradition in the life of covenant people. Angry protestations about declining membership rolls and budgets do not offer a prophetic word to the church. Paying closer attention to people and places and speaking out about who people are and what they are created for carry the potential for genuine transformation.