You are here: Home / Sermons/Writings / Faith and Works By Dr. Donna B. Cosulick

[Asked by the rector, the Rev. Edward Hasse, to preach on September 28, 2003 as she prepared to move to Tucson, AZ a few weeks later.] 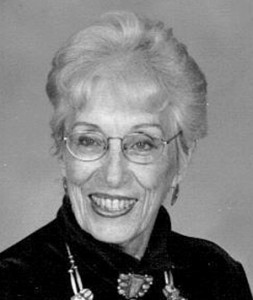 It’s wonderful to see so many people here and with such a great big choir! I can see that there have been many elves at work to celebrate my departure to Tucson. I have to say, however, one of our anthems today gave me a chill Wednesday night at rehearsal when the lyrics spoke of “God be in my head…and at my departing.” Several in the choir said they wanted it sung at their funerals – finally I had to say, “Hey, guys, I’m only going to Tucson!”

When Ed asked me to speak today about what St. Paul’s means to me, something about stewardship, since it’s that time of year, and what I would like to see here in the future. I said, “Sure but I’m not a sermonizer so it won’t be based on the scriptures.” However, two weeks ago one of the lessons spoke to me on something I learned in my church life here. But more of that later.

My early life was unchurched, essentially non or anti-religious and, influenced at age five by scary religious pictures and practices in a boarding school whose denomination shall be nameless. As I grew up, choral music and singing became integral in my life. And where accessible choral music is found: in the sacred lexicon and in churches. So – I was singing away in churches as, at best, an agnostic and probably an atheist and being put off by preachers who were knocking other denominations from the pulpit. But all that sacred music got into my head – Bach, surely, must have been a believer; else how could he write such beautiful music. My chorus director at the time put me onto a book that allowed my scientific mind to meld into possibilities of God and His creation. After this, it was a leap of faith that led me to seek church life. The Episcopal Church seemed a perfect fit for my maverick style of belief. It’s beautiful liturgy and tolerance of many belief systems attracted me. I had not a clue what it was like to be a church ember but plunged ahead looking for a parish, always with music in mind. The first parish I tried was an interesting experience: never sang the hymns because the choir was so bad I didn’t want anyone to know I could sing. I went faithfully for six months, attended a study group for Lent, was never asked by the rector (who ran the study group) who I was, what my name was, or why I was there. But I persevered – what did I know what a church was supposed to be like. One day a neighbor told me of her travails with that parish and said she had heard that St. Paul’s was a pretty lively place and was considering attending.

At this point, I would like to interject a couple of insights from my story [about] growing a congregation – welcoming a newcomer in personal ways is vital, and we do that beautifully. The second insight is talking to people about our church – I suspect we may be less good at this – I know it is true for me and it is something I’m working on.

Back to my faith journey: I came here and found out what a church should be! As I walked in the first time, the new church had the aroma of wood and brought to mind Jesus, the carpenter. My western roots loved the architecture. Then I heard a small choir singing with beautiful diction and sound. When I turned around I saw Paris at the organ. I was hooked. At the end of the service, being uncertain of protocol, I tried to leave by a side door. But that didn’t work – a big hand stuck out and the rector said, “I don’t believe I know your name.” Three weeks later, I went back and was greeted with, “Hello, Donna.” The next thing I knew I was in an 8-10 week confirmation course. Like many converts I dove in head first and did lots of church oriented things – choir, Christian ed, vestry, stewardship, diocesan worker, etc.

Now about stewardship: I learned about tithing from our stewardship programs and from our biblical lessons, but was terrified at the idea of giving 10% of my earnings, especially since I had never had a budget! But convert that I was, I took another leap of faith, [and] thought I should tithe. So I made a budget, found out where my money went (skiing, golf, and lots of other fun things), decided to dip my toe in the water and try 5 % and economize. That worked fine and I didn’t even notice any pinching – next year I went the whole 10% (the eager convert again). In summary, it never seemed to be a burden and, spookily, good things seemed to happen.

Our parish is filled with wonderful young families who have children to educate and support and care for. As a single person, I had it easy to tithe 10% with so few responsibilities, whereas, you young married people have huge ones. Responsible stewardship for you could be to look at your budget and intentionally include a set proportion of income to give to your church. I don’t like to predict a miracle, but my experience is that it will work out. In the weeks ahead, you’ll hear a lot about proportionate giving. Key words: look at your budget, plan and pray for guidance on what you can give.

Now to the promised reference to a lesson two Sundays ago. Some of you may know that one of my pet hobby horses is the ministry of the laity outside the church. This again is a result of my life here at St. Paul’s, and the example of our former rector, Wayne Schwab. We are God’s people everywhere we are and are his ministers and missionaries to the world wherever we are: home, work, play, government, etc. I have been very frustrated by the institutional church’s general lack in helping and supporting us to know that our mission is in and to the world. I gave up trying to change the church after the newly formed Commission on the Ministry of the Laity in the diocese of Newark only lasted three years. Wayne never gave up: he has just published a book When the Members are the Missionaries. There are stories from fifteen lay people who work for justice, freedom, peace and love in every place they are, in God’s name. We often talk about the church’s mission to the world. This is upside down: God’s mission has a church. The church should help us do that mission. Wayne’s book goes on in the second half with a blueprint on how a parish can change in this direction. I can’t say enough about what a life changing experience this can be for us and our parish. In the coming weeks, we are having a study group using Wayne’s book. I hope many of you will participate and find new life in your outside world.

So, what was the reference I made earlier to a lesson two weeks ago? It was from James 2:17-18: “Faith by itself, if it has no works, is dead. But someone will say, ‘You have faith and I have works.’ Show me your faith apart from your works, and I by my works will show you my faith.” As we engage the world outside these doors, by our “works” in recreation, home work, etc. with our faith and church beside us, we can become God’s change agents. You may find it hard to think this way, but to get started, try spending a day thinking that Jesus is at your side – it may change your view.

I’ve told you what St. Paul’s has been to me, a bit on stewardship, and a vision of what St. Paul’s can be. I am not saying goodbye today because I will be here the next two Sundays, so we can still talk about anything I’ve said today! Muchas gracias y vaya con Dios!