You are here: Home / Discussion Starters / Frances Perkins on Christians in politics 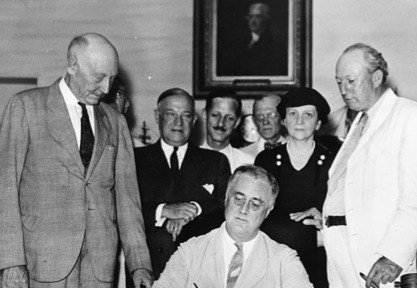 The Saint Behind the New Deal

“Christians must regard entrance into politics and political activity as a major basic Christian duty, and they must enter it as Christians.”  Note her belief, now enshrined in the collect for her feast day, “that the special vocation of the laity is to conduct the secular affairs of society that all may be maintained in health and decency.”  After engaging in settlement house work, safety inspections, and other local activities on behalf of the community, she served in the administrations of New York governors Al Smith and Franklin Delano Roosevelt.

As Roosevelt’s Secretary of Labor, 1933-45, she sponsored Social Security, workers’ compensation insurance, and the minimum wage.  She advocates that those who wish to promote the common good begin at the local level. Authority grows from engaging a small project close to home.  Christians can exercise their moral judgment there and thus develop a true authority that enables them to address problems at the state, national, or international levels later on.   For Perkins, politics and economics are part of moral theology. Politics addresses the ordering of society and economics as the way people make their living.  She repeatedly asserts that God’s laws must take precedence over human law, and what matters is not strict adherence to human interpretations of civil law but the moral welfare and moral improvement of actual people.
– The Living Church, May 4, 2014