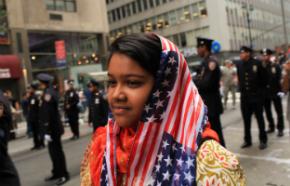 Aliza Fatima, 12, of Queens, participates in the American Muslim Day Parade on September 26, 2010, in New York City. The annual parade celebrates the presence and contributions of Muslims in New York City and surrounding areas. Photo by Spencer Platt/Getty Images via Thinkstock

“Hyphenated life: Mixed loyalties in family life and faith” by Joyce Shin in The Christian Century of 12/10/14. Living well when a couple mixes faith or culture or both. Biblical reference: “There is neither Jew nor Gentile, neither slave nor free, nor is there male and female, for you are all one in Christ Jesus” (Galatians 3:28, part of Paul’s letter to the Christians in Asia Minor). http:/bit.ly/1BLWvR3/