You are here: Home / Sermons/Writings / Missio Dei By The Rev. Kevin Hackett 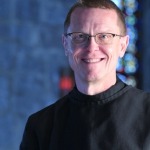 Today we are celebrating the feast of Saint Andrew the Apostle. Because the dating of the liturgical year is variable from the day of the week on which Christmas falls each year, this feast can either be the first of the New Year or the last of the old, which is instructive because it reveals that discipleship, vocation, and mission are first and last priorities for the Church. We could do a preaching series on those themes, and maybe we will, but this evening, I’d like to unpack the notion of mission, using as a point of departure, our Society’s call and mission.

Father Benson, with his vision of a community of men ready and available for ministry and mission, was responding to needs of his day and time, and for which no other remedy existed. He envisioned a prayerful community of men who would go where the ministry of the church, or as he would say, “the presence of the Body,” was most lacking—and therefore most needed.

Like many other religious communities of the time, SSJE was established to brighten—not bring—the light of God to a world that was ravaged by the dark and destructive excesses and unforeseen social and economic consequences of the Industrial Revolution, for which the Church, like the larger society in which it was situated, was completely unprepared. Communities like SSJE were founded specifically for the purpose of meeting unmet needs in a Church and world which had never imagined the social and environmental devastation of industrialization and modernity.

The virtual world, even on a 72 inch plasma screen, is not the real world. It is not the world of the Word-made-flesh, where “that which we have seen and touched and known” can be communicated to others and made concrete. So it seems to me that any serious discussion of discipleship, vocation, and, the new hot-button word, mission in these present times must begin against this backdrop because it gets us, members of SSJE and those who live in our wider circles of fellowship, back to the beginning, to the founder’s vision, which was and is a Gospel vision, an evangelical vision, a vision of good news.

A Tradition of Mission

Father Benson was way ahead of his time in his understanding of mission, which for him was fundamentally about making the presence of God in Christ visible and tangible. It was not about converting the heathen to Christ. I suspect he cringed whenever Reginald Heber’s missionary hymn, “From Greenland’s icy mountains” was sung.

The first stanza bears repeating, if only to underscore the very different world view that it presents:

From Greenland’s icy mountains, from India’s coral strand; where Africa’s sunny fountains roll down their golden sand: From many an ancient river, from many a palmy plain, they call us to deliver their land from error’s chain.

At the core of Father Benson’s theology was a high doctrine of the Incarnation. For him, everything else was dependent on the radical claim that in Jesus Christ, God had become a human being and in doing so, had invested humanity with a dignity that far exceeded that which was conferred at Creation as mere creatures of dust.

A century later, Mother Teresa, fueled by the same understanding of the dignity of human nature redeemed by Christ Jesus, would undertake the same kind of mission work that Father Benson had dreamt of, working to brighten the light of Christ already present in the slums of Calcutta. The mission of the Missionaries of Charity is not to convert anyone. It is rather to serve Christ in the poorest of the poor.

Unlike so many of his contemporaries, Father Benson was not concerned with success, at least as the word was commonly understood. In fact, he was disturbed by others’ preoccupation with numbers. He writes:

One always feels somewhat suspicious when missionaries speak of success, and I am afraid I am inclined to think that those missions which are truest to Christ will be slowest in their success…[1]

He was particularly concerned that India, a prime “mission field” for the Church of England at the time—and, what a coincidence, a place where vast fortunes could be amassed by enterprising, well-educated young men—he was concerned that Indian culture would yield too quickly to Christianity. In fact, he was skeptical that such a thing should even happen, writing,

Whether India will ever be a Christian country may be very doubtful. I cannot say I wish to see it. The experience of Christianizing countries leads one to believe that the country is Christianized at the expense of the souls…[by which he means the conversion of individuals, which he understands is a lifelong process]…when all are Christians none are.[2]

“I should be very sorry if India were rapidly Christianized after the pattern of Europe… [with] the nominal acceptance of some Christian phraseology while their hearts are far from God.”[3]

So far, it seems to me, that our Society’s work is still very much congruent with what Father Benson envisioned. We, like him, have a much more subtle understanding of mission, noting in our Rule of Life that

Christ sends us with the same passionate trust and love with which the Father sent him into the world. Our mission is to bring men, women and children into closer union with God in Christ, by the power of the Spirit that he breathes into us. Christ is already present in the life of everyone as the light of the world.[4]

We, like him, are more apt to be concerned with the quality of someone’s prayer and their life in relation to God, than we are the number of souls we may or may not have won for Christ. That very language strikes many of us as repugnant.

Where I went to seminary, it was culturally common to speak of the “mission of the Church” and “the ministry of the Church,” in which we were called to share. The language was intentional—a corrective for an over-earnest student body’s propensity to speak of “my ministry” or “my mission.”

During my second year, however, our understanding of mission was enlarged even more after a visit by Leslie Newigin, then Bishop of the Church of South India. He spoke not of the Church’s mission or ministry but rather of the mission of God, the missio Dei, a term which has gained great currency in recent years. The use of Latin is somewhat misleading, suggesting an ancient warrant, but it’s actually a modern term, arising from theological debates in Germany during the 1930s—but it is entirely consonant with Patristic theology and the Fourth Gospel, with its almost incessant use of the words send, sends, sending, and sent.

To put it simply: the Church participates and shares in God’s mission already present and active in the world. Jurgen Moltman speaks of it this way,

It is not the Church that has a mission of salvation to fulfill in the world; it is the mission of the Son and the Spirit through the Father—that includes the Church.[5]

1. The movement for equality between the sexes, for instance, did not begin in the Church; it was in the work place that justice for wages and treatment was first enacted. The Church was very slow to follow, though it is true that our brother Paul Wessinger played an important early role in opening the monastery to women and with his advocacy for their ordination. Was this the work of God, part of God’s mission in the world? I would say, without a doubt.

2. Similarly, the struggle for recognition for gays and lesbians as full and whole human beings did not begin in the Church. Rather, it began when a group of drag queens in a dreary bar in Greenwich Village had finally had enough of police harassment. Tawdry? Maybe. Was it the work of God, part of God’s mission? I think so, yes, though the Church is still hashing this one out.

3. And third, the finallygrowing concern for the earth and the environment. Environmentalists and ecologists have been laboring on this for decades—Rachel Carson’s Silent Spring is usually cited as the galvanizing text, not anything from the very late-coming, hardly speaking Church. The work of God? Evidence of God’s mission in the world? Absolutely.

The point of all this is to say that mission is of the very essence of the God we know as Trinity, and like holiness, part of God’s very nature, not simply an attribute. God, Bishop Newigin would say, is a missionary God, a sending God. His warrant for such a claim is the Gospel according to John—just as the Father sent the Son and the Father and the Son sent the Spirit, so the Father, Son, and Spirit sends the Church into the world. Mission is primarily about making the presence of God incarnate, that is, visible and tangible, in a particular place and a particular time, where ever “the Body is lacking”—and therefore most needed.

This is language that Father Benson would hear as deeply truthful, I think, and I am confident he would have recognized its theological implications for and critique of many missions past.

I would not presume to say what our share in God’s mission might be in the next stretch of the Church’s life. I do believe, however, that if we are fearless and faithful in our work of discerning whatever it is, it will make demands on us that will call forth gifts and strength that we did not know we had. We have at least as much going for us as did the Twelve. We are no less and no more gifted than they. All Jesus asks is of us is what he asked of them. Follow.

[5] Jurgen Moltmann, The Church in the Power of the Spirit: A Contribution to Messianic Ecclesiology, London: SCM Press, 1977, p. 64.

[The Rev. Kevin Hackett, Priest and Brother of the Society of Saint John the Evangelist, an Episcopal Monastic community for men in Cambridge, MA, Retreat Leader and Spiritual Director, and Serves as Director of Music of the Monastery, Director of Communications, Received BS from Oral Roberts University in 1979, Earned M.DIV. from Duke Divinity School in 1997, Hymn Writer, and Author.]