You are here: Home / Discussion Starters / The Cost of a Decline in Unions 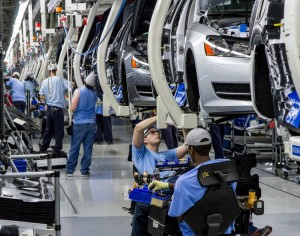 The Volkswagen plant in Chattanooga, Tenn., has had a flurry of union activity the past year. This week, workers seeking an alternative to the U.A.W. succeeded in having their group officially recognized by the German automaker. Credit Erik Schelzig/Associated Press

“The Cost of a Decline in Unions” by Nicholas Kristof in the NY Times of 2/19/15. “The abuses [of unions] are real. But, as unions wane in American life, it’s also increasingly clear that they were doing a lot of good in sustaining middle class life — especially the private-sector unions that are now dwindling.” A similar biblical reference: “The laborer deserves to be paid” (1 Timothy 5:18b). http://nyti.ms/1vZMFuZ