You are here: Home / Sermons/Writings / Moral Animal Sermon, The By Rabbi Johnath Sacks 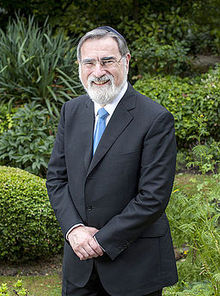 IT is the religious time of the year. Step into any city in America or Britain and you will see the night sky lit by religious symbols, Christmas decorations certainly and probably also a giant menorah. Religion in the West seems alive and well.

But is it really? Or have these symbols been emptied of content, no more than a glittering backdrop to the West’s newest faith, consumerism, and its secular cathedrals, shopping malls?

At first glance, religion is in decline. In Britain, the results of the 2011 national census have just been published. They show that a quarter of the population claims to have no religion, almost double the figure 10 years ago. And though the United States remains the most religious country in the West, 20 percent declare themselves without religious affiliation — double the number a generation ago.

Looked at another way, though, the figures tell a different story. Since the 18th century, many Western intellectuals have predicted religion’s imminent demise. Yet after a series of withering attacks, most recently by the new atheists, including Sam Harris, Richard Dawkins and the late Christopher Hitchens, still in Britain three in four people, and in America four in five, declare allegiance to a religious faith. That, in an age of science, is what is truly surprising.

The irony is that many of the new atheists are followers of Charles Darwin. We are what we are, they say, because it has allowed us to survive and pass on our genes to the next generation. Our biological and cultural makeup constitutes our “adaptive fitness.” Yet religion is the greatest survivor of them all. Superpowers tend to last a century; the great faiths last millenniums. The question is why.

Darwin himself suggested what is almost certainly the correct answer. He was puzzled by a phenomenon that seemed to contradict his most basic thesis, that natural selection should favor the ruthless. Altruists, who risk their lives for others, should therefore usually die before passing on their genes to the next generation. Yet all societies value altruism and something similar can be found among social animals, from chimpanzees to dolphins to leaf cutter ants.

Neuroscientists have shown how this works. We have mirror neurons that lead us to feel pain when we see others suffering. We are hard-wired for empathy. We are moral animals.

The precise implications of Darwin’s answer are still being debated by his disciples — Harvard’s E. O. Wilson in one corner, Oxford’s Richard Dawkins in the other. To put it at its simplest, we hand on our genes as individuals but we survive as members of groups, and groups can exist only when individuals act not solely for their own advantage but for the sake of the group as a whole. Our unique advantage is that we form larger and more complex groups than any other life-form.

A result is that we have two patterns of reaction in the brain, one focusing on potential danger to us as individuals, the other, located in the prefrontal cortex, taking a more considered view of the consequences of our actions for us and others. The first is immediate, instinctive and emotive. The second is reflective and rational. We are caught, in the psychologist Daniel Kahneman’s phrase, between thinking fast and slow.

The fast track helps us survive, but it can also lead us to acts that are impulsive and destructive. The slow track leads us to more considered behavior, but it is often overridden in the heat of the moment. We are sinners and saints, egotists and altruists, exactly as the prophets and philosophers have long maintained.

If this is so, we are in a position to understand why religion helped us survive in the past — and why we will need it in the future. It strengthens and speeds up the slow track. It reconfigures our neural pathways, turning altruism into instinct, through the rituals we perform, the texts we read and the prayers we pray. It remains the most powerful community builder the world has known. Religion binds individuals into groups through habits of altruism, creating relationships of trust strong enough to defeat destructive emotions. Far from refuting religion, the neo-Darwinism have helped us understand why it matters.

No one has shown this more elegantly than the political scientist Robert D. Putnam. In the 1990s he became famous for the phrase “bowling alone”: more people were going bowling, but fewer were joining bowling teams. Individualism was slowly destroying our capacity to form groups. A decade later, in his book “American Grace,” he showed that there was one place where social capital could still be found: religious communities.

Mr. Putnam’s research showed that frequent church or synagogue-goers were more likely to give money to charity, do volunteer work, help the homeless, donate blood, help a neighbor with housework, spend time with someone who was feeling depressed, offer a seat to a stranger or help someone find a job. Religiosity as measured by church or synagogue attendance is, he found, a better predictor of altruism than education, age, income, gender or race.

Religion is the best antidote to the individualism of the consumer age. The idea that society can do without it flies in the face of history and, now, evolutionary biology. This may go to show that God has a sense of humor. It certainly shows that the free societies of the West must never lose their sense of God.

[Jonathan Sacks is the chief rabbi of the United Hebrew Congregations of the Commonwealth and a member of the House of Lords.]